University of California Press, one of the most distinguished university presses in the US, enriches lives around the world by advancing scholarship in the humanities, social sciences, & natural sciences. Its activities're supported by the UC Press Foundation & by philanthropic contributions from individuals and institutions.
UC Press is among the 6 largest university presses in the US &, of these, is the only one located in the West & associated with a public university. UC Press: Publishes approximately 200 new books and 50 multi-issue journals annually; Keeps in print approximately 4,000 titles ; Provides all journals and 2,000 books online. Publishing areas: Art, music, cinema and media studies, classics, literature, anthropology, sociology, archaeology, history, religious studies, Asian studies, biological sciences, food studies, natural history, public health. An international cast of authors: Writers, artists, journalists, and scholars working both within and outside the academy. About one-fourth are affiliated with the University of California.
Organization & Leadership.
UC Press functions as a unit of the Office of the President, University of California.
Director: Lynne Withey.
About the Director

Business and distribution services:
California/Princeton Fulfillment Services, Ewing, New Jersey; European marketing and distribution services in cooperation with Columbia and Princeton University Presses.
UC Press Board of Directors: Provides financial oversight and includes leaders from business, publishing, and executive offices of the University of California Office of the President.

UC Press Foundation Board of Trustees: Raises funds on behalf of UC Press & includes distinguished volunteers active in the cultural communities of Northern and Southern California. 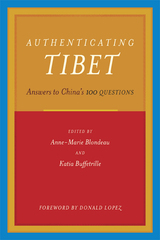 The Authenticating TIBET, Answers to China's 100 Questions has edited by Anne-Marie Blondeau and Kathia Buffetrille and published by University Of California Press in 2008.
"True or false: Tibet has always been a part of China. True or false: Prior to 1959, the majority of the Tibetan population were serfts living under feudal lords. True or false: Between 1959 and 1979 more than one million Tibetans were killed by the Chinese..." Donald Lopez wrote in his introduction to this title.
The land of Tibet has long been both a source of fascination & an object of contention. Since 1959 Tibet has been at the center controversy.
In 1989 the Chinese government published a booklet, 100 Questions about Tibet, that sought to counter the criticism generated by the Dalai Lama & his followers & to offer the PRC's "truth" about Tibet... This remarkable title is a respond to this booklet. In this very important book international Tibet scholars offer unbiased and clear answers to the 100 questions.
Anne-Marie is Honorary professor of Tibetan Studies. Katia Buffetrille is a Research Fellow, both at Ecole Practique des Hautes Etudes in Paris. Donald Lopez is Arthur E. Link Distinguished Professor of Buddhist & Tibetan Studies in the University of Michigan.