The dollar sank to new lows in Europe February 27 following a series of dour reports on the U.S. economy & expectations that the Federal Reserve'll continue slashing interest rates. The 15-nation currency hit a series of highs, culminating at $1.5087 before falling back slightly to $1.5059 in afternoon trading, from the $1.4967 it bought in late trading in NY on February 26. In other trading, the British pound soared to $1.9971 before falling back to $1.9897, up from $1.9862 late Tuesday, while the dollar fell to 106.07 Japanese yen from 107.26 yen. With the rising pound, which is nearing $2 again, the muscular euro will not be kind to Americans visiting Europe. They'll have to pay more for a hotel room in Rome, for entrance to the Louvre in Paris, for chocolates in Belgium... The stronger euro makes shopping trips to the U.S. more appealing to Europeans. A higher euro makes goods from the euro-zone more expensive for customers abroad. And cuts into manufacturers' profits if they try to keep the American dollar price of products constant. In Paris, France's budget minister Eric Woerth called the euro "a handicap for our exports." The strong euro isn't expected to have any lasting effect on Germany's economy. Volker Treier said that they can't yet speak of a threshold of pain for German exporters. Howard Archer, the chief UK and European economist for Global Insight, said that the euro's strength isn't likely to weaken anytime soon, given that any worsening in U.S. interest-rate differentials dilutes a key support for the dollar. Archer said that growth prospects in the USA, coupled with its deficit, will exert a significant downward influence in the long term & cause some countries to shift more of their reserves from $ to other currencies, including the euro. He added that in addition, there is the very real possibility that several countries could switch a proportion of their foreign currency reserves out of U.S. dollars over time. Gary Thomson, an analyst with CMC Markets in London, said that markets'll be looking for clues from Fed Chairman Ben Bernanke about more rate cuts in the USA when he addresses lawmakers Wednesday. Investors shrugged off a 1 percent rise in the producer price index this week. The data could effect rate decisions coming out of the Fed. Thompson said, referring to a string of dissapointing economic reports out of the USA on Tuesday that inflation (or perhaps more to the point stagflation ) remains a concern for the Fed as seen with yesterday's PPI data and as a result now that the most significant of psychological levels since parity has gone, we could see further downside pressures emerging for the greenback. The NY-based Conference Board's Consumer Confidence Index fell to 75 in February from 87.3 in January Its lowest level since February 2003. Inflation number that was worse than expected, Standard & Poor's reported that USA home prices fell 8.9 percent in the last 3 months of 2007 from a year earlier, its sharpest drop ever. Those reports, along with remarks by Federal Reserve Vice Chairman Donald Kohn that appeared to diminish inflationary concerns & focused instead on greater near-term risk to growth were seen as a clue that more rate cuts may be forthcoming...
ISLAMIC ART AT THE MUSEE DU CINQUANTENAIRE 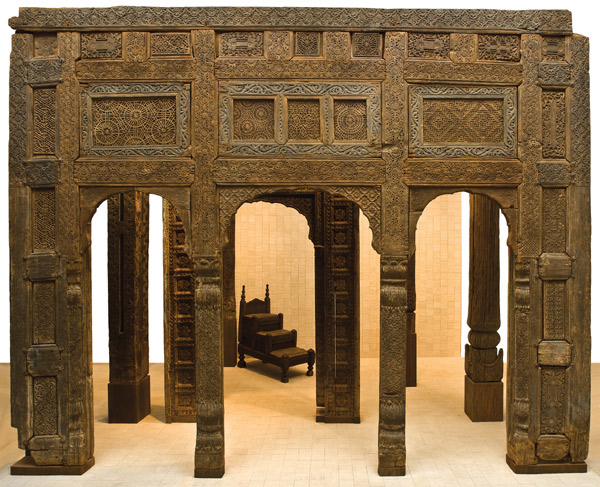 This room (54 x 14 x 6 m) is an extension of the temporary exhibition entitled «Art of Islam in the Belgian collections». Exhibit organized for the Cinquantenaire from 5 December 2003 to 25 April 2004, that had allowed the Royal Museums of Art & History to show their riches in this field. A survey carried out among the public & the guides of the educational and cultural services contributed to define precisely the concept of the room. In a splendid venue, designed by architects Jan Goots & Anne Pire, it hosts 340 of the 1200 objects from the collection. Not to mention the thousands of shards from Fustat & the nearly 200 weapons momentarily stored at the Musée de l'Armée...
Richness in textiles, carefully selected & restored for this event, cover a wide territory, from Southern Spain up to Northern India. The most famous ensemble is the one of the textiles, made up for the greater part from the donation of Isabella Errera (1869-1929). It includes the Egyptian textiles from the beginning of the Islamic period, a linen qamis dated between 1150 and 1230.
Also Andaluzan and Sicilian silks; Turk silk weaved cloths with a fragment from the çatma, probably the most ancient Turkish velour in the world; the Iranian textiles and those from central Asia, with its lampas that look like miniatures.
The collection includes ceramics that cover the period from the IXth to the XIXth centuries. It is Sassanian ceramics, glossy ceramics from Kashan, tiles from Iznik as well as a pair of unique Armenian pieces from Kütaya. In the collection of ancient glass an enameled glass tumbler from the end of the Ayubbide period or from the beginning of that of the Mameluks. Metal objects, the art of stonework, miniatures and books are also represented. Decorative wood fragments from a small mosque in North-Western Pakistan, as well as three columns from the same region, acquired by the Royal Museums of Art and History between 1992 and 1996, are set up in the room to form an ensemble that will be one of the highlights of the presentation. This is a diversified but ill-assorted collection, given the fact at it was made a little late. That certain elements are lacking: Indonesia, the largest Islamic country in the world, is not represented. Furthermore, the pieces assembled were made for a small sector of the population: the sovereigns, the merchants or the urban bourgeoisie. While it offers a rich insight, the collection does not pretend to represent Islam in its totality. An extension of the former room of the Near-East, to which it is linked by the architrave of Zebed (a masterpiece that bears the oldest Arab inscription in the world), the room is organized according to 2 criteria. On the lower floor, the exhibition is carried out by region & by period, in s7 different cells. On the mezzanine, themes are presented alternately. This 1st exhibition, entirely made up pieces from the collection, studies life in the desert, in a village & in a town. Videos, interactive stations & a game for children add a different, additional lighting to the objects shown.