in New Jersey. Sculptor, painter, graphic artist and print-maker, he had over 400 exhibitions in the United States and Europe. He conducted hundreds of sculpture workshops in Italy, Denmark and USA. Grigory's bronze tableau of seven life-size figures "The Commuters," sculpted in 1985 is permanently installed at the Newark Penn Station in New Jersey.
His book "Reflections" features 17 lino-cuts, etchings and mixed media prints. This book can be found in the print collection of New York Public Library, the Rare Book collection of Newark Public Library, the Library of Saint Bonaventure University, and Hermitage Museum in St. Petersburg in Russia. He created and patented a manifolding book, which also can be found in the libraries of Brooklyn Art Museum and Columbia University of Chicago.
He is the founder of "Arts on the Hudson" after school art program for gifted and talented students of Jersey City...
Grigory thinks that "there is nothing more permanent as CHANGE." His website is www.grigorygurevich.com

3rd Place: Frederique Krzis-Lorent was born in 1956, in Rouen, France. In 1982, she has received her Advanced degree in Architecture D.P.L.G. She was working as an architect and textile and furniture designer... Professor of Applied Arts for 5 years, in 2001 she has received her Diploma in art therapy. Today, she is dedicating her life exclusively to the ARTs.
"Faithful to the straight line, FrederiqueK often constructs her canvas starting from squares, a figure of rich symbolism that particularly suits her. To be rigorous is not to be rigid... FrederiqueK invites us to escape from the impotence, to

react differently across our anguish. She is fascinated by fashion, and its refinement, its fabrics, the ideal of thinness, its light, its brilliance and its elegant women, its evanescence, and its mystery. Behind the appearance, FrederiqueK paints woman in her modernity...." said art critic Alain Coudert.
Frederique Krzis-Lorent paints in her place in Lille, France. In her work, she focuses on the light, calm interior, the woman, nature. Stylish and sophisticated, her art works carry sign of the contemporary world with its glamour and amazing uniqueness. She said to the NeoPopRealism Journal that she is influenced by the Greek art and its manner to look at the human body through its sculptures - school of Praxitèle; by the Italian renaissance for the construction, the looks, the drapes, the colors, the dough thinness, the woman… Angelico, Filippo Lippi; by Vermeer for the light, the post-impressionists; and the Russian constructivism (20s) because the color has a preponderant place in the reflection of the latter, and also because she is an architect.
She uses old techniques. "The Néopopréalism imposed to me as an evidence, by my state of mind and my taste for the feminine portrait..." Frederique added: "My goal for the future is to show my canvases in the United States."
For more information visit www.frederique-k.com

Honorable Mention: Paolo Scalera (United Kingdom) was born in Italy. Now he lives in London. Paolo's connection with Italy inspires his work through using the chiaroscuro technique. His work possesses sense of simplicity, feelings of nostalgia and romanticism; his camera captures his emotions and joy of life.

Paolo Scalera has worked as a freelance photographer for many publications, including Elle Japan, The Irish Independent and Food and Wine Magazine. He exhibits his work since 1999, and developed a form of printing images using traditional printing techniques. Paolo created series of black-and-white images using the photographic darkroom, without digital imagery and manipulation...
For more info contact Paolo Scalera.

Simon Kavanagh was born in Dublin, Ireland, in 1974. He lived in Paris, then he moved to Shanghai, later he has returned to Europe, Denmark... In College, he studied Art and Design Education. He brought his skills into commercial multimedia, and within 1 year had become Creative director. Over the next six years he learned everything about production in all areas of MM for all platforms, inc. development of high end video and animation.
"I have always been an artist," Simon said. "Having the time to create is the challenge. When I lived in Shanghai, I found the stimulus there so intense that it allowed me the extra energy and inspiration to bring my art to the public. There, I had 2 major shows... a collection of 5 years work, and a graffiti show where I tested out my approach to interactive and media art on a large scale."
"What if the work of art becomes the interface, a dialogue of thoughts and perhaps also of common creation-cooperation and shared experience," Simon Kavanagh shares his thoughts with NeoPopRealism Journal. "The audience shares in the production of the exhibit,
contributes its imagination, and becomes a participant. An interactive art piece must facilitate the most natural and simple

Former President Bill Clinton Earned Millions in Speaking Fees
Former President Bill Clinton earned nearly $6 million in speaking fees last year, almost all of it from foreign companies.$4.6 million of the former president's reported $5.7 million in 2008 honoraria came from foreign sources, including Kuwait's national bank, other firms and groups in Canada, Germany, India, Malaysia, Mexico and Portugal and a Hong Kong-based company that spent $100,000 on federal lobbying last year. Executives at many of the firms have also donated large amounts of money to the Clinton Foundation.
In addition to Bill Clinton's income from speaking fees, There is joint holdings of between $6.1 million and $30.3 million in a blind trust as well as cash, insurance and retirement accounts worth between $1 million and $5.2 million. Hillary Clinton made between $50,000 and $100,000 in royalties from her 2003 memoir "Living History." Bill Clinton earned between $100,000 and $1 million in royalties for his 2004 autobiography "My Life," the documents show. The Clintons reported no liabilities. All senior officials in the Obama administration are required to complete a detailed disclosure of their personal finances, including family members.
Deputy secretaries of state, Jacob Lew and James Steinberg, also filed financial disclosure forms. Lew, a former Clinton administration official who recently headed Citigroup's Alternative Investments unit, reported 2008 salary income of just over $1 million along with numerous investments. Steinberg, who recently was a professor at the University of Texas, reported receiving $35,000 in 2008 for foreign speaking engagements, including three before Japanese media firms and one before the Confederation of Indian Industries in New Delhi. The most Bill Clinton got($1.25 million) for appearing at five events sponsored by the Toronto-based Power Within Inc., a company that puts on motivational and training programs around N. America. For one Power Within speech alone, delivered in Edmonton in June 2008, Clinton was paid $525,000. For one event, he got $200,000 and for three others $175,000 each. The Hong Kong firm, Hybrid Kinetic Automotive Holdings, paid Clinton a $300,000 honorarium on Dec. 4, 2008. On Dec. 29, the company's chief financial officer, Jack Xi Deng, made a $25,000 cash donation to the Virginia gubernatorial campaign of Clinton confidant Terry McAuliffe. The Hong Kong firm paid at least $100,000 in 2008 to lobbyists on immigration issues. The other foreign honoraria Bill Clinton received in 2008 are: $450,000 from AWD Holding AG, a German-based international financial services company. $350,000 from the state-owned National Bank of Kuwait. The Kuwaiti government donated between $1 million and $5 million to the Clinton Foundation. $300,000 from Value Grupo Financiero SA de CV, a Mexico-based financial holding company, whose chief executive officer, Carlos Bremer Gutierrez, is one of the Clinton Foundation's leading donors. Gutierrez donated between $250,001 to $500,000 to the foundation. $250,000 from Germany's Media Control Gmbh, which bills itself as the world's leading provider of entertainment data and was founded by Karlheinz Koegel, who contributed $100,001 to $250,000 to the Clinton foundation. $200,000 from Malaysia's Petra Equities Management on behalf of the Sekhar Foundation run by Malaysian multimillionaire Vinod Sekhar who donated between $25,001 and $50,000 to the Clinton Foundation. In addition to the foreign earnings, Bill Clinton made just over $1 million from domestic speaking engagements, including $250,000 from MSG Entertainment, $225,000 from the National Association of Home Care and Hospice, $200,000 from the United Nations Association, $175,000 from the ING North America Insurance Corp., $125,000 from the Rodman and Renshaw Capital Group and $100,000 from the Hollywood Radio and Television Society.
U.S. and China

Secretary of State Hillary Rodham Clinton has said that ties between USA and China may be off to a rocky start just days into the Obama administration... In his inaugural address, Barack Obama spoke of how earlier generations of Americans had faced down fascism and communism. China's state broadcaster quickly faded out the audio of its live broadcast... On Thursday, Obama's choice to lead the Treasury Department, Timothy Geithner, wrote that Obama believes China is "manipulating" its currency, which US manufacturers say Beijing does to make its goods cheaper for U.S. consumers.
The United States often criticizes China about trade abuses and human rights. But USA and China find themselves increasingly intertwined in a host of crucial economic, military and diplomacy. Yang Jiechi (China's foreign minister) said that his country was committed to working with the Obama's administration to strengthen cooperation. Selig Harrison (director of the Asia program at the U.S.-based Center for International Policy) said that it was "very ill-advised" for the new administration to confront China as if this were 10 years ago and USA were in a strong financial position internationally. He said that USA are dependent on Chinese goodwill for economic survival and viability, and, it seems that this type of posture is very risky. Former President George W. Bush made it a priority to strengthen relations with China pushing the country to live up to what he considered its duties as an emerging global superpower and a veto-holding member of the U.N. Security Council. China says it has made progress on currency changes and worries about bills introduced in Congress that would impose economic sanctions on China. But trade ties between the United States of America and China often are tense. Geithner said that China is "manipulating its currency." He suggested that now might not be the right time to brand Beijing as a currency manipulator under USA trade law, which could lead to USA trade sanctions against imports from China. The foreign minister of China Mr. Yang has said that he studies U.S. television. magazines and newspapers. Obama and Clinton, during their long campaigns made clear their desires for a tougher position with China about its trade practices and its human rights record. Obama's administration isn't complete. He has yet to name many of the officials who will be dealing with China issues. Also, Obama has not yet decided whether to continue the high-level economic discussions the Bush administration has held twice a year with China. The Chinese have said during the past few months that they want a good start to their relationship with the new U.S. administration. Glaser said that everybody needs to be a little patient on this. I would not draw any conclusions that the administration has decided to take a tougher stance, and hopefully the Chinese will be patient while the administration works this out...
Image Comics: Women
Often the subject of controversy, women have been portrayed in comics books since the medium's beginning... Introducing selected titles: 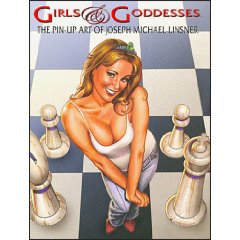 The Limited Edition of the Girls & Goddesses: The Pin-Up Art of Joseph Michael Linsner (with introduction of Eva Hopkins) published by Image Comics in 2007.
Joe Michael Linsner didn't hate women, he adored them, and had them up on a pedestal. He thought they all are goddesses with some little spark of magic.
His mom had been letting him hang Playboy centerfold since he was 13 yo... Joe has been ogling women for most of his life. Many of beautiful women have posed for Joe, and he always managed to find something goddess-like in women of many types, sizes and shapes. Girls & Goddesses is a compendium of his vision, his excitement and fascination which he expressed using his artistic imagination. This deluxe edition contains dozens of Linsner's previously unpublished works. 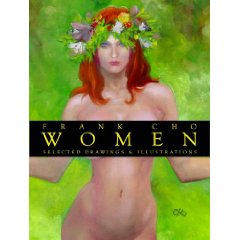