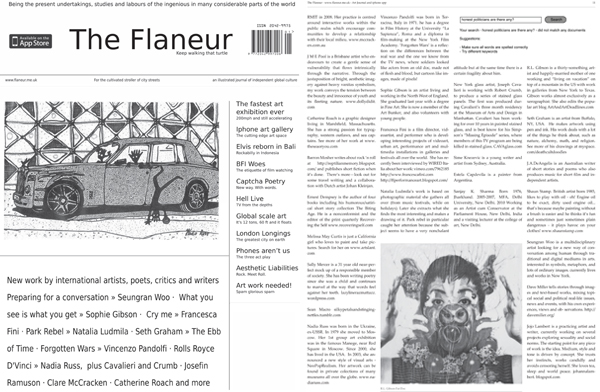 The new Rolls Royce issue of The Flaneur is available now. The Flaneur is independent, global arts journal published quarterly in the United Kingdom. The Flaneur is
the first independent art and culture journal published for the iphone and is packed with art, ideas, fiction, poetry, reviews and much more, from artists, writers and critics around the world. Publisher and editor - Jonathan Powell.
There are three ways to get The Flaneur - as a printed newspaper, as an iphone app, and as a pdf file to read on your computer (www.flaneur.me.uk)

She is loving her status as a Hollywood leading lady.
Ashley says that she fought so hard for her role in upcoming horror flick The Last Exorcism.
“...It’s incredible!” Bell said of starring in her first major role.
“I thought to myself ‘my parents would be so proud right now". She was raised on all of these horror films. And Greg Nicotero did all of the special effects work. She did all of the physical stuff but he handled the effects. And getting the chance to go to his studio and see the ‘things’ Ashley has watched for years was mind blowing. And Eli Roth, producer of the film, is such a master in the genre. He knows how to build stories…how to build suspense, she said.
19th Amendment to the US Constitution, Women's Suffrage, Celebrates its 90th Anniversary

Lives We Carry With Us

Lives We Carry With Us by Robert Coles published by The New Press in 2010. This is the portrait writing: biographical storytelling, intellectual and interpretive analysis with personal reflection of the author. Robert Coles offers examination and insight into contemporary lives of moral courage, profiles, which many consider to be his signature genre. It is a memoir of those guardian spirits who challenged, shaped, and inspired his voice - one of moral voices of our time... Awards-winning author, Robert Cole is professor emeritus at Harvard University and the author of numerous books, including a Pulitzer Prize winning series Children of Crisis

July 28–August 15, 2010. Enjoy longstanding favorites and discover something new with Lincoln Center Out of Doors, going on now. Join us for FREE world-class music, dance, and spoken word on the plazas of Lincoln Center.
Highlights of the city’s most popular free summer series includes: