GoGreen returns to New York with Eco-Stars Mariel Hemingway and Higel Barker, screening from the Sundance channel, Disney's earth and more than 225 Eco-exhibitors. New York, NY – Go Green Expo, the largest environmentally-focused business and consumer show in New York’s history, announces its exciting return to New York City for the 2nd year in a row April 17-19, 2009 at the Hilton in Midtown Manhattan. The nation’s premiere eco-friendly business and consumer show promises the strongest show yet with big name exhibitors including The GREEN, DELL, Home Depot, Food Network’s Good Food Garden, and Honda’s all-new advanced hybrid vehicle, The Honda Insight...
Earthquake in Italy
The quake hit 26 towns and cities around L'Aquila, which lies in a valley surrounded by the Apennine mountains. Castelnuovo, a hamlet of about 300 people 15 miles (25 kilometers) southeast of L'Aquila, appeared hard hit, and five were confirmed dead there. Another small town, Onno, was almost leveled.
At least 91 deaths have been confirmed. The latest toll was announced to parliament in a briefing to lawmakers. Some 1,500 people were injured.
A powerful earthquake in mountainous central Italy knocked down whole blocks of buildings early Monday.
Iran Rebuffed Barack Obama
Iran's supreme leader rebuffed B. Obama's latest outreach, saying that Tehran was still waiting to see concrete changes in the United States policy. A. A. Khameneiwas responding to Obama's video message released Friday, March 20 in which he reached out toIranon the occasion of Nowruz, thePersian new year. He expressed hopes for an improvement in nearly 30 years of strained relations.Khamenei holds the last word on major policy decisions.In his most direct assessment of Barack Obama and prospects for better ties, Khamenei said that there'll be no change between the two countries unless the U.S. presidentputs an end to hostility toward Iran.Khamenei said in a speech before a crowd of tens of thousands in the northeastern holy city ofMashhad that U.S. chant the slogan of change but no change is seen in practice, they haven't seen any change.

Thursday, March 12, Bernard Madoff pleaded guilty to charges that he carried out an epic fraud that robbed investors around the world of billions of dollars. His name became synonymous with the economic meltdown. B. Madoff entered guilty pleas to 11 counts he was charged with, including perjury, fraud and theft from an employee benefit plan and two counts of international money laundering. The disgraced financier has spent three months under house arrest in his $7 million Manhattan penthouse. Madoff could face a maximum sentence of 150 years in prison.The plea came three months after the FBI claimed Madoff admitted to his sons that his once-revered investment fund was a big lie. The scandal has turned the 70-year-old former Nasdaq chairman into a pariah who has worn a bulletproof vest to court. The scheme evaporated life fortunes pushed at least two investors to commit suicide and wiped out charities. Victims were swindled by Madoff, from elderly Florida retirees to actors Kevin Bacon and Kyra Sedgwick and Nobel Peace Prize winner Elie Wiesel...
UFOs
Throughout history, the dancing lights have appeared above most thunderstorms. But researchers did not start studying them until one recorded a sighting on camera in 1989. Scientists found out that only a specific type of lightning is the trigger that initiates sprites aloft. Lightning from the thunderstorm excites the electric field above, producing a flash of light called a sprite. Researchers have detected the flashes between 35 and 80 miles from the ground, far above the 7 to 10 miles where usual lightning occurs. Sprites can take the form of fast-paced balls of electricity. Previous footage has suggested streaks or tendrils. The cause or function of the flashes remains murky, but researchers suggested that they could explain some of the UFO reports. That might provide some solace for UFO enthusiasts disappointed by human-caused hoaxes in the past.
A Month After...
A month after leaving the White House, George W. Bush and his wife, Laura, moved into their new Dallas home. Bush's new residence is a 1959 ranch-style brick home that located at the top of a quiet cul-de-sac in a wealthy Dallas area.
Bushes are glad to be back in Dallas, and look forward to again being part of the Dallas community. Their new home has about 8,500 square feet, 4 bedrooms, four-and-a-half bathrooms and a wet bar. The home on Daria Place is worth about $2.1 million. This house has a wide front yard and dark shutters, with a gate at the top of the driveway. The Dallas City Council last month approved installation of a security gate that will block access to the street...
The New Talent Magnet: Washington D.C.

USA: Washington rather than New York is attracting the best and brightest. Metro Washington leads the nation in the share of jobs that are in high-tech and the share of workers with advanced degrees.
Job-seeking Wall Streeters who jump on Amtrak's Acela to Washington may be dismayed to find that the maximum pay for an FDIC bank review examiner is close to $180,000. The pay can be a lot better, at the Beltway Bandit consulting firms that are ramping up to assist the FDIC, Treasury Dept., and others. Consultingjobs for senior specialists in finance can pay $200 an hour.Companies such as Computer Sciences Corp., Science Applications International Corp., or SAIC, and Booz AllenHamilton employ people in the Washington area and continue to expand. Professional and business services, which include private-sector lawyers, accountants, engineers, and consultants, made up 21% of metro Washington's annual economic output...
Aptera 2e

Aptera 2e is a soon-to-be-produced electric vehicle whose shape is slipperier than a Teflon-coated salmon on glare ice, and whose construction offers both impressive structural integrity and light weight. The 2e is scheduled to begin rolling off the Vista, California, assembly line this October, 2009 for price between $25,000 and $40,000...

Shortest Man In The World

The world's shortest man alive and certified by Guinness World Records, is Chinese He Pingping, 20. He is 2 feet, 5.17 inch or 74.1 centimeter-tall. He gave a press conference in Tokyo February 13, 2009.
He Pingping visited Japan to promote Japanese 2009 edition of the annual Guinness Records book. 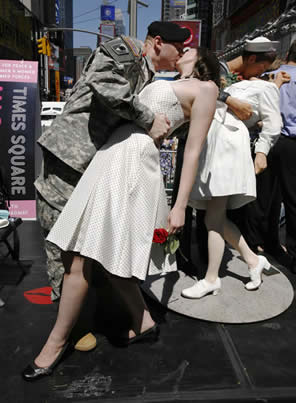 A panel of scientists examined the mystery of what happens when lips lock and hearts throb. Kissing unleashes chemicals that ease stress hormones in both sexes and encourage bonding in men, but not so much in women. Chemicals in the saliva may be a way to assess a mate. In an experiment, pairs of heterosexual college students who kissed for 15 minutes while listening to music experienced big changes in their levels of the chemicals oxytocin, which affects pair bonding, and cortisol, which is associated with stress. Their blood and saliva levels of the chemicals were compared before and after the kiss. For men, oxytocin levels increased, indicating more interest in bonding, while oxytocin levels went down in women.
In a test group that held hands, chemical changes were similar, but much less pronounced. More than 90 percent of human societies practice kissing, which has three components — the sex drive, romantic love and attachment. The sex drive pushes person to assess a variety of partners. Romantic love causes to focus on an individual. Attachment allows to tolerate this person long enough to raise a child. Men tend to think of kissing as a prelude to copulation. Men prefer kisses, in which chemicals including testosterone can be passed on to the women in saliva. Testosterone increases the sex drive in both males and females. Scientists say that when we kiss an enormous part of our brain becomes active. Romantic love can last a long time, if you kiss the right person... Lateiner, a classical scholar, observed that kissing appears infrequently in Greek and Roman art. It was widely practiced, despite the spread of skin disease at that time by facial kissing. There was a potential for social faux pas by kissing the wrong person at the wrong time. The science of kissing — philematology — is under-researcherd.