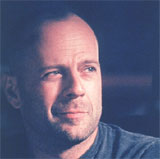 Bruce Willis grew up in New Jersey.
He attended Montclair State College & joined its theatre department.
He did many auditions & finally landed a role in the play Heaven and Earth in 1977. This role gave Willis reason to quit school. From there, he moved to Hell's Kitchen to pursue his dreams of being an actor.

Up next for Willis was being cast in off-Broadway plays and also getting roles in television commercials. The first breakthrough in Willis' career would come in 1984, when he replaced the lead in Fool for Love. His and the play's run lasted for 100 performances off-Broadway.

Later in 1984, Willis took a trip to Los Angeles. He auditioned for the role of David Addison on a show called Moonlighting. Willis was selected from 3,000 contenders and won the role. He starred opposite Cybil Sheppard. Moonlighting became a huge success. Bruce won an Emmy and a Golden Globe Award for his phenomenal work on the show.

Willis' Moonlighting success propelled him into movie stardom. He has starred in many popular movies and is one of today's most well-known and talented actors. Bruce has made such wonderful films as the Die Hard movies, Sixth Sense, Whole Nine Yards, Hostage, and Sin City (to name a few).

Willis has had an amazing career and is truly one of the most versatile actors of his generation.
Bruce was one of People Magazine's Sexiest Men Alive, 2006. He is found in the "Bald and Beautiful" section.
Category:
Celebrities
Articles